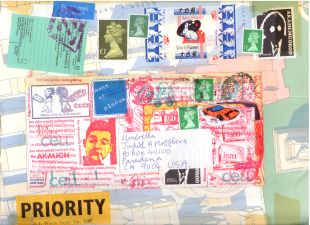 As a student leader in the push to save the UCLA Arts Library from dismemberment, actions including a petition signed by 4,000 people, coverage in the Daily Bruin {not once, but twice} and an outpouring of Social Media hits, we were successful in keeping the library in tact with full operating hours. Below is the open letter I wrote to the University President…

There are many things that college has taught me and a great things I am yet to learn. As a World Arts and Cultures major, I am no stranger to outrage at the disintegration of the arts in our modern society. Indeed, a core principle of my education thus far has been towards sensitivity to the frailty of the arts. Yet, I am not so oblivious to believe that the building of great monuments to the arts in LA such as the New Getty, Walt Disney Concert Hall or the new Kaufman and Broad buildings would not, in time, render other venues in the city inauspicious at best, or frivolous at worst. With every great achievement, previous greatness becomes yesterday’s news. With the crowning achievements that the internet has achieved in the past two decades, the written word, the printed book or the writing on the wall has been rendered sub-par. And it comes with deep regret and sadness that I hear news of the tumultuous future of our arts library here at the University of California, Los Angeles.

I would prefer not to mark such a wide gap, but while the Business school library features study spaces fit for a king, our humble arts library sits perched deep in North campus, congruent with its surroundings and simple in its furnishings. The Business library has swivel chairs which I have heard quoted at over $300 a seat, while our abode is “retro” in the worst sort of way. Yet, in my time, the arts library has lived up to both its calling and its potential. Books and periodicals have I tracked down on topics from Jewish artistic practice in the old world to limited edition collections on the most prolific graffiti artists in New York City.

“Where will the arts catch a break?”, one must wonder in our position. Why must we constantly scrap and save on every corner while the patent farms in South Campus are given every resource within reach? In my time, I have suffered from hiring freezes and cuts in my department, even while our very integrity as a discipline was called into question. I entered UCLA in 2006, two years after the “UCLA Year of the Arts.” Oh, how things have changed. Great gifts by Broad & Kaufman to build monumental buildings for arts education have not been met with comparable interest or fervor by the University.

The question becomes, where do we draw the line? Where do we say enough is enough? Do we have to wait for the university to start privately selling the Fowler collection to get outraged? Soon, it will be too late.

The knowledge repository at the arts library is real and is worth saving. At the library, the papers I have crafted out of thin air have become concrete and earthen by the great scholars who managed to have their work published. I could walk into that library with a vague idea or principal, and discover that I was not the first to come up with such an idea, nor would I be able to say it better than the experts. This humbling is critical to a student. But because of these scholars, I walked into the arts library with a seed and I walked out with a tree. Gone is the hope that I could one day have my own anthology bound and preserved here.

Thank you for taking the time to hear my thoughts,