Warning: Use of undefined constant DATABASE_SERVER - assumed 'DATABASE_SERVER' (this will throw an Error in a future version of PHP) in /nfs/c11/h02/mnt/204644/domains/wesleypinkham.com/html/wp-config.php on line 28
 Premium Guest Experiences Are Destroying the Festival Scene – WESLEY WOLFBEAR PINKHAM 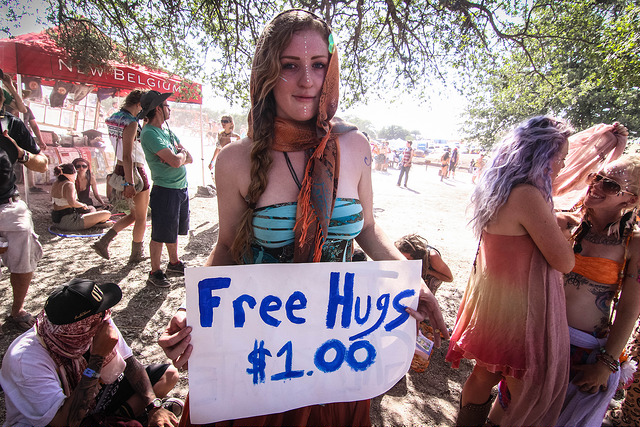 But now back to AEG! Which owns Goldenvoice which is in a joint-partnership and may or may not own a controlling stake in Red Frog Events which produces Firefly Festival in Delaware. This Firefly of course is not to be confused with the exquisite Firefly GATHERING in Flagstaff, which many of us are waiting anxiously to return from hiatus.

Yes, a friend shared an article with a jarring headline:
Music Festival: Pay Us $500 to Shoot Concert Photos for Us.

It’s a bit of an overstatement, or an oversimplification. Firefly decided to offer, as one of its premium experiences, the opportunity to “play photog” for a set. They’ve since taken down the offering, maybe realizing that the direction was all wrong. It was someone’s good idea on a marketing call, and they didn’t think through the implications. It happens.

But is this any different than any other number of premium options that festivals are trying to capitalize on? West Coast festivals are eagerly hyping up educational experiences, premium VIP camping, fancy ass meals or wine or spas or weed or… The list goes on.

As to whether what Firefly was offering was different…
It is, but only by a few degrees.

I watched at Lucidity Festival as participants in the InnovationWorks track learned from Bamboo-wizard Gerard Minakawa. They spent almost a week building one of the installations, a bamboo temple, and learning how to work with the material. Yet, essentially, they paid to help us build the festival. The space wasn’t a core component of the event (say, the commissary or a stage), but nonetheless, they were paying to work on the build.

It got me thinking, what else could we convince people to pay us to learn how to do? Would participants take a week to learn conscious cooking and catering with Collision Cuisine’s kitchen, essentially paying us to cook? Could they learn how to provide festival medical services, earning hours toward an EMT license? Or could we teach a budding photographer how to develop their festival photography brand?

The difference was that Firefly was like, “yeah, we don’t actually want to *teach* anything, we just want you to pay us a bunch of money.”

That’s the difference between a consumer experience and a truly engaging offering. It requires very little vulnerability between either party. You pay us. We give you. End of transaction.

It’s more or less the same disease that destroyed Fyre Festival. You pay us lots of money. We give you status. Unearned status, by the way, except for the fact that you’ve got the money. It’s the same disease that infects some Burning Man pay-for-play camps. It created a sense of Holier-than-Thou at Further Future… It’s those PREMIUM EXPERIENCES that seem to buy your way into something that you aren’t.

(We’ll have to talk about Fyre here once the heat’s died down. It’s a trendy topic that no one inside the scene will be hurting from in in six months, at which point it will ACTUALLY be useful to mine it for knowledge).

Here’s an example of a premium experience that’s priced appropriately and truly is what it says it is: hot air balloon rides at Oregon Eclipse. Or riding the ferris wheel at Coachella or EDC.

But in the cat-and-mouse game of hand-wringing investors, festivals are really trying to think outside of the box to find additional revenue streams. That’s all this offering was. If the goal was to provide incredible EXPERIENCES, they would have offered this as a giveaway. Or a contest. Or a lottery for people who buy their tickets between certain dates.

Firefly offers a lot of premiums: equipment rentals, travel packages, a spruce up zone with A/C restrooms and a lounge. 79 bucks per person. Just to make it feel less like you’re camping. A “Carefree Camping” package for four for $500. Collectables.

The shitty part is that I know this isn’t the Firefly that the production team sees day in and day out, but they have to keep the lights on and the money flowing. Their marketing is heavily reliant on being “fan-curated,” and they’ve got some cool initiatives. For example, they’re pulling in fan mail for all of the artists on the lineup and will drop it in their dressing rooms. Cool! But like, also, whatever.

DSLR cameras aren’t allowed in for guests at Firefly. Same goes with Coachella. Hell, last year, Coachella told its media that they could only use their in-house photo pool. Anyway, I digress.

The problem comes to the forefront when a festival confuses EXPERIENCES with ACCESS.

To contrast, Bumbershoot in Seattle offers (or offered, I’m waiting on a confirmation) a photography TRAINING PROGRAM for youth, where they’re partnered up with media professionals to learn the tools of the trade in an amazing environment.

There are some other cool opportunities, like having your own beach house bash or some other kind of Party in the Woodlands prior to the gates opening. But it’s run-of-the-mill stuff, no? “Wine tasting… Beer pong tournament… Karaoke…”

How about MAYOR OF FIREFLY for a day? You command a small battalion of city employees to enforce your (legal and silly) edicts. All attendees will spin until they fall down. How about your own pimped out golf cart filled with water bottles and thousands of snacks to give out. I don’t know, I’m just vamping here.

Again, ACCESS vs. EXPERIENCES. There’s such a big difference.

The festival industry wouldn’t exist if it weren’t for the free work of attendees. Festivals literally could not turn a profit without volunteer programs, or “Interns,” or “Apprentices,” or “Lightning Teams,” or “Dream Makers,” or whatever you want to call them.

But a good volunteer program is *WORTH IT* for certain kinds of folks. You don’t just get access (in the form of a ticket or working backstage or sorting trash), you meet lifelong friends, learn new skills, arrive early, stay late, and become part of the very fabric of how that festival is seen to the rest of the world.

Idealistic, I know. But this is how festivals should approach their guest experiences: how will this be a life-changing moment? That’s where you make your fortunes.

Want to get these posts by email? Sign up for my newsletter here.

One thought on “Premium Guest Experiences Are Destroying the Festival Scene”